Def.— Fungus:  any one of a group of related plants (such as molds, mushrooms, or yeasts) that have no flowers and that live on dead or decaying things.

We have too many relationships in our lives that have lost their core, their reason to exist. They become like fungus, once attached to a living, thriving entity, now dead. Even worse, those connections have become solidified — devoid of even symbiotic attachment. We become simply a carcass of petrified fungus.

It is an observable fact that many organizations and individuals grow stagnant in the way they function. The zest that once typified them has slipped into the doldrums of despondency. Relationships take effort. If there seems to be no umph! in your marriage or church or company maybe it is because you have lost your vision, or your sense of expecting God to work. Maybe your relationship, be it spousal or friendship, has plummeted the depths of boredom because you just haven’t put anything into it lately…, or, for a long time. Your life & friendships are dying from a lack of oxygen.

Being the first one to make the effort to bring fresh air back into a mission, or marriage, is always a daunting effort. If God has designed you to be the one who must initiate the first steps toward reconciliation, or restoration, or forgiveness, then get used to it. It’s what you were made for. Think of it as your curse, or your privilege; doesn’t matter. JUST GET ON AND DO IT.

Sure, you get tired of being the one who must initiate every innovation or repair of a relationship. You wish to God that someone else would beat you to it. Again, it doesn’t matter. SIMPLY DO IT. Do not let unresolved issues run-on unresolved. The deepest pain I live with are people who do not want resolution in relationships. But there have been points where all my efforts became futile. It is only after years of trying that I give up, realizing that true resolution must be a two way street.

If you do not come to a resolution you will find yourself in a petrified relationship— within your place of work, your friendships, or your marriage. And it will eventually kill you. YOU will become a petrified fungus, no longer capable of doing little more than lying there, dormant, ineffective, and, in essence, a dead weight to anyone around you.

Is this what you want to settle for in life? I sure as hell don’t. 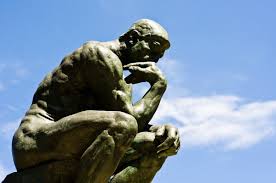 Yes, the title of this article is intentionally misspelled. Why? Because it forced you to think about it; to wonder if the writer knows how to use Spell Check, or to conclude he is just stupid or lazy.

One of the easily observable facts of our time is that the average American finds thinking too tedious. The most difficult question we often face is— Large or small fries with that? Part of this situation is due to our 8th grade reading level being supplanted by sound-bytes on television. Thinking about issues is just too much work; just observe and absorb.

Thus do we leave thinking to the experts— science says, logically speaking, whatever the pastor says, leave it to the government to figure it out (well, except maybe during this present shutdown, or the next one), trust your doctor. Really?!? Have we actually entered a time when trusting the specialist, the expert, precludes our entrance into the conversation!?!

Our passive compliance to leave the thinking to others yields a dangerous dilemma. First, we tend to leave the resolution of complex issues in the hands of our elected officials, the scholars, the MDs & PhDs, or the religious elite of our era. Secondly, over time, we actually lose our ability to think. We simply listen and numbly respond, “Well, that sounds OK. Right?” and we never consider the other side of the debate.

This becomes distinctly evident in a person’s search for life-meaning, or life philosophy. Or should I say, the lack thereof. Considering the possibility of meaning, a meta-narrative, a life-purpose, has become, yes, too much work. Leave the difficult questions to the elite, the intellectuals, the government (well… ).

One of the primary reasons people do not want to consider Christianity is that it is just too much work. They are not against the Christian faith; it just seems superfluous to think about it, or any belief system, for that matter. In the grand scheme of things, I’m fine!

When we cease pondering the deeper questions of life, we will become a nation of neurological numb-nuts, blindly accepting whatever truth is handed down to us by the intellectual aristocracy as Truth. Investigation of Truth will be lost to the few who decide for us what it is. Brilliant!

[Note: To the genuinely Christian among us— get your brains in gear.]